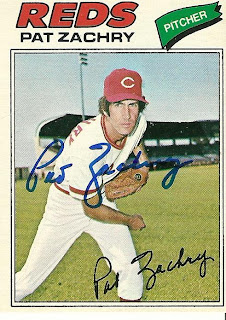 His career wound up in 1985 as a reliever for Philadelphia, and was cut in June of that year. Pat later ended up pitching in the Senior Professional Baseball league.
His stats for his MLB career are 69-67, 3.52 ERA and 669 strikeouts and was an All-Star in 1978.
Posted by Tony at 12:18 PM 3 comments: 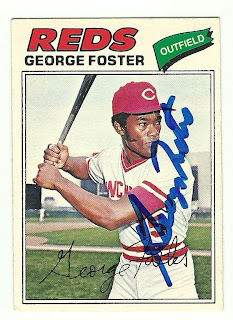 This was a card show purchase. George Foster was in Toronto a few years ago for a celebrity dinner, and baseball game the next day. I attended the game the next day, and I ended up missing Foster who had to catch an early flight. The dealer assured me this card was signed at the dinner the night before. George Foster doesn't seem to be on the "circuit" that much, and I haven't seen much through the mail success from him, so I'm hoping it's legit.
George Foster hit for a .274 batting average, with 348 HRs, 1,239 RBIs, 1,925 hits and 986 runs scored in 1,977 games played. In 1977, Foster hit 52 home runs, making him the only major league player to belt 50 or more homers in a single season during a 25-year period (between Willie Mays with 52 in 1965 and Cecil Fielder with 51 in 1990).
Posted by Tony at 3:05 PM No comments: 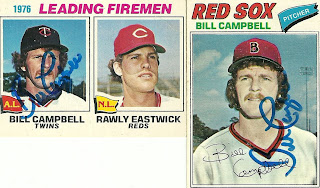 Received both cards signed by mail. Campbell was one of the top relief pitchers in all of baseball with the Minnesota Twins in 1976 and the Boston Red Sox in 1977. He signed with Boston after the 1976 season as one of the first high profile big money free agents in baseball. Campbell was elected to the American League All-Star team in 1977. Campbell was awarded both AL Fireman of the Year by The Sporting News and Rolaids Relief Man of the Year Award (the first American League winner and first two-time winner of this award) following the 1976 and 1977 campaigns. He was an All-Star in 1977 and ended his career in 1987 as a member of the Montreal Expos. His career stats are 83-68, 3.54 ERA and 864 strikeouts with 126 saves.
Posted by Tony at 9:33 AM 1 comment: 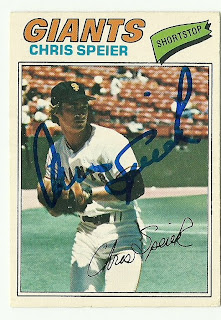 Received this card signed in the mail. Chris is currently a coach with the Cincinnati
Reds. He played in the majors for 19 years and started and ended his career with the same team, the San Francisco Giants. In between, he played for Montreal, St Louis, Minnesota, and the Chicago Cubs. He was a 3 time All-Star, and was a lifetime .246 hitter with 112 HR's and 720 RBI's. Chris is also the father of former Blue Jay pitcher Justin Speier.
Posted by Tony at 4:23 PM No comments:

Signed in person at the fanfest in Toronto in 1991. One of the premier pitchers in the 1970's, he possessed a breaking curveball that he threw on occasion and an above average change-up, but his signature pitch was a blistering fastball that dialed up to nearly 100 miles per hour. On September 11 1970, he shut out the Kansas City Royals 3-0, giving up only one hit, to Pat Kelly in the eighth inning. Ten days later, he no-hit the Minnesota Twins, 6-0, at Oakland-Alameda County Coliseum, with the lone baserunner being Harmon Killebrew, who walked in the fourth inning. Blue had a 24-8 record in 1971, winning both the Cy Young and MVP awards.[8][9][10] He also led the American League in complete games (24), shutouts (8) and Earned run average (1.82). 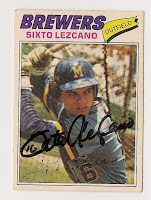 In the mail success. He played for 12 seasons as an outfielder in the Major Leagues between 1974 and 1985. He played for 5 different teams in the Majors and won a Gold Glove in 1979. While with the Brewers, he became the only player in Major League Baseball history to hit a grand slam on Opening Day twice, doing so in both 1978 and 1980. His career ended in 1986 with the Pittsburgh Pirates who released him in spring training before the 1986 season, which would end his Major League career. In 1987 he joined Japanese team Taiyō Whales but he wasn't successful in Japan. His career average is .271 and 148 HR's.
Posted by Tony at 4:02 PM 1 comment:

Through the mail success. Dave McKay was the first Canadian born player to play for the Toronto Blue Jays in 1977. He started his career with the Minnesota Twins in 1975 and ended with the Oakland A's in 1982. 2008 was Dave's 25th consecutive season as a Major League coach. First with Oakland (1984-95) and St. Louis (since 1996). He has coached on five pennant winning and two world championship teams. Dave was elected to the Canadian Baseball Hall of Fame in 2001 and is the father of Cody McKay who played in the majors briefly in 2002 and 2004.
Posted by Tony at 4:00 PM 1 comment: